A prospective client approaches you with a serious request. His grand piano, an instrument with historic potential, was caught in a flood. It sat on its side, soaking for days in river water that reached halfway up its keyboard. It is very important to the client and his associates that the piano is able to work again. Other technicians have already refused to go past a phone call and have advised the client to junk the piano. Will you take a look?

This situation faced Sam Lewis of Nashville, Tennessee, following the devastating Cumberland River flood that struck the city in May of 2010. The piano, a Steinway B, was owned and used on stage by the legendary Southern rock band LynyrdSkynyrd. It had been played by rock and gospel keyboardist Billy Powell, who was a member of LynyrdSkynyrd for many years and died suddenly of heart failure in January of 2009 at the age of 56.

The Steinway was being housed in a road case, a crate designed for transport and storage of touring instruments and equipment. Flood waters crept in, inundating everything to a height of more than three feet.

The piano carried a strong sentimental attachment for members of the band and for Billy Powell’s family. Both groups wanted to remember Powell by having the piano returned to playable condition.

Well aware of the odds against success, Lewis decided to take on the job. 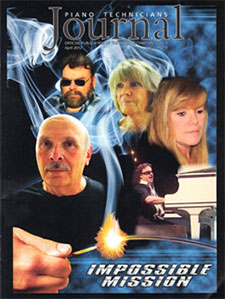 Several other technicians had turned down this job and condemned the piano without seeing it. Why did you decide to take it on? Were you confident from the start that you could get this piano working again?

I had also turned it down without seeing it. I first learned about the B in a phone call from Steve Voudoris, LynyrdSkynyrd’s manager. He described the situation and told me that other techs had refused to even look at the piano, that it was a lost cause.

When I learned that the piano had been stored on its side and the water level had come up to about middle C, I too, thought it would be pointless. Voudoris explained that the piano was very important to the band’s members and to Billy Powell’s family. He assured me that they had no plans to put it back to use in performance, but the piano was too valuable to just throw away.

I had no confidence at the start that this work could be done, especially after the piano arrived and we opened up the road case. After almost 6 months, everything was still wet! 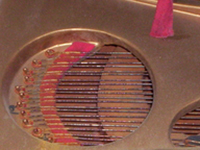 Rusty strings, needed to be replaced. 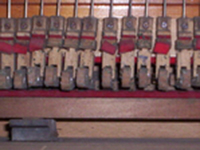 Inside the piano, these are the damper levers.

What’s left of the hammers after being soaked!

What jobs did you perform to get the piano back into working condition? What were your biggest challenges?

The mold, mildew and mud were dealt with first, partly for health reasons and partly because I had to get to the point where I could determine if anything could be done for the piano. It was almost overwhelming at first, because there was just so much damage: hammers that looked like they had exploded, pieces of still-wet felt all over, water oozing out of the wood, rust on everything that was capable of rusting. I decided to just remove everything that I could remove and take stock. Parts were labeled and photographed as I took them out.

After everything was cleaned and the piano had dried out somewhat, I installed half a dozen test strings in each section. I was pleased to see that tuning pin torque was acceptable. I then installed sample hammer and wippen assemblies for my new strings, and they responded well also. That’s when I called Steve Voudoris and told him that I had confidence that we could give the band and Billy Powell’s family what they wanted.

My toughest decisions were about what to keep versus what to throw away. Since this was basically a conservation effort rather than a total rebuild, I wanted to keep as much of Billy’s original piano as possible.

I cleaned bridges with a fine wire brush and ScotchBrite pads. I did that to the plate, too, but far more gently. Traces of duct tape, midi installation tape, and foil from the piano’s performance days were all left in place. We couldn’t make it look too nice.

Next, the piano was restrung. There are now three different sizes of tuning pins in the original pinblock. I’m not sure if the reason was flood-related or the result of one too many previous restrings, but one pin size did not fit all.

The keysticks were quite warped, but the keytops were all still there. I thought it was mandatory to save the piano’s keys, as they were part of Billy Powell’s legacy, pieces that he had touched. As I did all the work to make the keys function again, I remembered my task: “Just make it hold tune and play.” It didn’t have to be great, just acceptable—press down on a key and produce a tone. In addition to the keys, I saved the damper blocks and damper wires. All the rest of the moving parts in the action had to be replaced.

The cases were too damaged to use again, and were later burned to prevent souvenir hunters from breaking them apart and keeping or selling pieces.